Pump System Could Contain Important Clue to the Hunley’s Disappearance

Though the H. L. Hunley has been emptied of sediment, scientists continue archaeological work inside the submarine. The interior and exterior sections of the submarine are covered with a heavy layer of concretion, which masks internal mechanisms of the submarine and locks artifacts in place. The work of investigating these hidden layers is just beginning.

This summer, while scientists began working to remove the concretion and artifacts from the forward and aft crew compartments, they uncovered new operational details about the vessel that may provide an important clue as to why the Hunley vanished after becoming the world’s first successful combat submarine.

Once a layer of the concretion was removed, an integral series of valves and pumps, connected by a pipe running from the forward to the aft ballast tank, was exposed. The configuration suggests that the submarine’s pump system may have had a dual purpose. Scientists knew the pumps were used to control the water level in the ballast tanks, which enabled the submarine to rise or dive while in operation. The complexity of the pump system is leading scientists to believe it also served as a bilge system that would have allowed the crew to remove water from inside the submarine in the event of an emergency.

Depending on the valve setting and pump position, Hunley scientists may be able to tell if the crew was desperately trying to remove water from the crew compartment or trying to pump water out of the ballast tanks to gain buoyancy the night that it vanished on Feb. 17, 1864.

The remaining concretion still covers a majority of the pump system and has not been further removed because it protects the submarine from corrosion as it awaits conservation treatment.

Scientists are hopeful that once they can safely excavate and x-ray this key aspect of the submarine’s internal pump mechanisms, it will allow us to know what the crew was doing in the last moments of their voyage.

Senator McConnell, Chairman of the Hunley Commission, said, “As we dig inch by inch into the concretion, we get closer to the final clues that will help solve the mystery of why the Hunley disappeared.”

The forward pump was next to Hunley commander Lt. Dixon’s station. While excavating in this area, many artifacts were found that provided insight into his responsibilities on the submarine.

Excavation Manager Maria Jacobsen said, “We uncovered a mysterious concreted object that upon closer inspection turned out to be an intact oilcan, with oil in liquid form still within it.”

A number of other artifacts were de-concreted from this section of the submarine, including a metal rod, a rectangular flat metal strap, fragment of rubber-impregnated canvas, an iron wedge, nut, and hammer. Previously a number of wrenches and bolts were found near the hammer, and scientists believe these items were once part of a tool bag, which deteriorated during the submarine’s 136 years on the bottom of the ocean floor.

A section of a depth gauge was also discovered, which still had mercury in it.

“Finding these tools by Lt. Dixon’s station shows that he not only knew how to navigate the submarine, but had a deep understanding of how the submarine worked and was actively involved in the ongoing maintenance of his ship,” said Warren Lasch, Chairman of Friends of the Hunley.

Lost at sea for over a century, the Hunley was located in 1995 by Clive Cussler’s National Underwater Marine Agency (NUMA). The hand-cranked vessel was raised in 2000 and delivered to the Warren Lasch Conservation Center, where an international team of scientists are at work conserving the vessel and piecing together clues to solve the mystery of her disappearance. 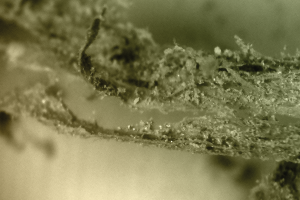