Time Stands Still on the Hunley

Charleston, SC – March 7, 2003 – For almost 140 years, scholars have wondered how long the H. L. Hunley lasted after she torpedoed the USS Housatonic in 1864. Did the concussion cause the world’s first successful military submarine to sink immediately or did she last longer before she disappeared into the sea?

Scientists are now closer to solving that intriguing mystery, thanks to the pocket watch of Hunley captain Lt. George Dixon. On Wednesday, the scientific team excavating the submarine opened the watch and were able to observe the position of the hands when the watch stopped. “We are now able to narrow the time frame down to between 6:00 and 9:00, but the question remains, is it a.m. or p.m?” said Project Director Dr. Robert Neyland. “After further excavation, we may be able to establish a more precise time.”

In order to open the watch and to determine the time the watch stopped, Senior Conservator Paul Mardikian had to open the crystal because the glass was opaque in color. The crystal was held in place by a metal ring (bezel) surrounding the crystal which had to be removed to get to the face of the watch. “It’s a miracle that the hands are even still here,” Mardikian said. “They are quite damaged, but they are still here and fused to the face. There was a pocket of air trapped inside the watch. I believe that’s the only reason the hands still exist after all these years. The other parts of the watch, where there was no air, were not as well preserved.”

“The precise time is difficult to determine because the hour hand is broken around the dial where the hands connect and it is premature to designate a time until further cleaning can be done,” said Senior Archaeologist, Maria Jacobsen. “The other hands are in better condition. The minute hand is set at 22 after the hour and the second hand is stopped at 20 seconds.”

On the night of February 17, 1864, the Hunley and her crew of eight made their historic journey in Charleston’s Harbor by becoming the first submarine in history to sink an enemy ship in battle, but then she mysteriously disappeared. According to historical records the Hunley attacked the Housatonic at approximately 8:45 that night. So what does the time of the watch really mean?

Senator Glenn McConnell, Chairman of the Hunley Commission, says the watch supports one longtime theory. “I believe the apparent time suggests the watch outlived the crewmen and continued to tick for many hours past their deaths,” McConnell said. “It also raises the supposition that the submarine may have remained less than flooded long after the demise of the crew. If the submarine had flooded shortly after the attack, it seems probable the watch would have stopped at a time closer to, but after 8:45 p.m. when the attack on the Housatonic occurred.”

McConnell’s theory suggests the crew may have died later from lack of oxygen and not from drowning after the attack. “One thing is certain,” McConnell added. “We should not draw any firm conclusions. Instead, now is the time to accent the importance of carefully collecting the scientific data to put together the accurate picture of this fascinating historical puzzle.”

Warren Lasch, Chairman of Friends of the Hunley, said he was delighted to hear that the watch appeared to contain so much useful information “What an incredible moment,” Lasch said. “When the watch was opened, with the hands in place, it was as if the crew was telling us another part of this amazing story.” Scientists believe the watch may yield more information about its owner, Lt. Dixon. This watch is specifically a hunter case pocket watch, made of gold. “The details of the case are exquisite,” Lasch said.

The watch case was opened first. On the inside, scientists found three stamps and a serial number engraved, which will lead to detailed information about the case manufacturer. “Obviously there is more work to be done,” Jacobsen said. “We hope to find an inscription on the inside of the back case.”

The H. L. Hunley was located in 1995 by Clive Cussler’s National Underwater Agency (NUMA), a 501c3 non-profit organization. The hand-cranked submarine was raised in 2000 and delivered to the Warren Lasch Conservation Center, where an international team of scientists are at work excavating and conserving the historic vessel and its artifacts. 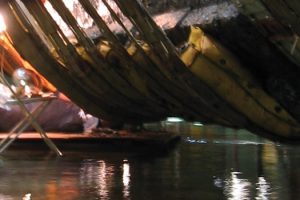 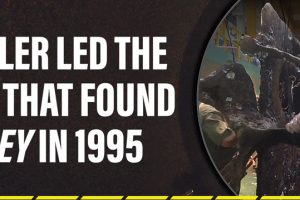