(Charleston, SC) – Best-selling author Patricia Cornwell will lend her expertise and financial support to help scientists solve the lingering mystery surrounding the loss of the Hunley submarine and her crew off the shore of Charleston 142 years ago. Cornwell’s collaboration with the Hunley project will be announced during a press conference at the Warren Lasch Conservation Center this afternoon.

A bestselling author in more than 35 countries, Patricia Cornwell is a #1 New York Times best-selling author of both fiction and non-fiction. Her most recent number-one bestsellers include the novels Predator and Trace, and the non-fiction title, Portrait of a Killer: Jack the Ripper – Case Closed.

Cornwell believes the submarine holds the clues needed to solve the mystery, but knows it won’t be easy. “This is a 19th century crime scene, where evidence has been corrupted by its underwater environment. We will need to push modern technology to the limit to extract the information that is needed to discover what happened to the Hunley.”

The collaboration will include a $500,000 contribution from Cornwell. The donation will be earmarked for further research to discover the cause of the submarine’s and its passengers’ fates. Her involvement will ensure Hunley scientists are equipped with the latest forensic technology as they try to discover the evidence the vessel and human remains have to offer. “There are important questions still left to be answered. To do that, a detailed autopsy must be done on the submarine,” Cornwell said.

Senator McConnell, Chairman of the Hunley Commission, said, “We are in the process of solving one of the most intriguing mysteries in American history. Patricia’s talent and expertise will be a valuable asset as we attempt to discover the final secret, why the Hunley did not come home on February 17th, 1864, on her last voyage.”

Cornwell recently visited the Hunley lab while doing research for an upcoming book. She initially planned to stay a few hours, but instead spent two days meeting with scientists and became increasingly fascinated by the Hunley and its history.

“If we don’t answer these questions now, they may never be answered. The men who died on the Hunley would want us to know what happen to them. I want to know. This will be a great and worthy challenge.”

Friends of the Hunley
On the evening of February 17, 1864, the H. L. Hunley became the world’s first successful combat submarine by sinking the USS Housatonic. After signaling to shore that the mission had been accomplished, the submarine and her crew of eight vanished. Lost at sea for over a century, the Hunley was located in 1995 by Clive Cussler’s National Underwater and Marine Agency (NUMA). The hand-cranked vessel was raised in 2000 and delivered to the Warren Lasch Conservation Center, where an international team of scientists are at work conserving the vessel and piecing together clues to solve the mystery of her disappearance. This material is based upon work assisted by a grant from the Department of the Interior, National Park Service. 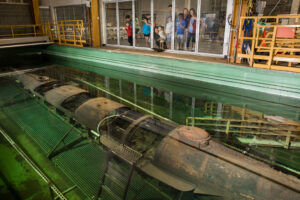 Hidden Side of the Hunley Soon Revealed