Starting this Monday, the Hunley scientific team will start excavating the two ballast tanks of the interior of the world’s first successful submarine. In July, a quarter panel in the forward ballast tank was removed in preparation for this excavation phase. “We will begin by deconcreting a quarter plate in the aft ballast tank on the port side. We will try and have this removed in the next two weeks,” said Harry Pecorelli, Hunley staff archaeologist and member of Clive Cussler’s NUMA crew that first located the Hunley in 1995.

Archaeologists do not anticipate finding many artifacts within the ballast tanks, but the Hunley has offered up many unforeseen discoveries. The earlier excavation phases uncovered a wide array of artifacts from the nineteenth century, including diamond jewelry, the crewmen’s personal possessions, a Union identification tag, and Lt. Dixon’s legendary gold coin. The contents of the submarine have been preserved largely due to the vessel being buried relatively quickly in a low oxygen environment. “The sediment may tell us if the two holes that are in the ballast tanks occurred during the attack or long after it’s sinking. It could provide yet another clue as to why the Hunley failed to return to port on Feb. 17, 1864. This may well be the last possible area for artifacts of any great significance so let’s hope some drifted in there over time,” said Senator Glenn McConnell, Chairman of the Hunley Commission.

The recent focus on the Hunley project has been on the forensic investigation of the crewmembers as scientists began the detailed documentation of each crewmember’s remains with the knowledge that they will be interred and inaccessible after April of next year.

After the recovery of the vessel in August of 2000, scientists found that the entire submarine was filled with sediment. Although the sediment appears black to the naked eye, x-rays of the sediment show distinct layers. Staff archaeologists are hopeful that these layers, or strata, may provide clues as to how the submarine filled in and why the Hunley never returned after her history-making mission in 1864.

The nine-inch openings in the bulkheads between the crew compartment and the ballast tanks could not have left much room for cleaning. “These tanks were not really used as a place to store anything. Plus, you would not want something to accidentally block the outflow pipe, making it impossible to pump the water out of the tank,” said Pecorelli. “But we do hope to learn how the ballast tanks were constructed and how the pumping system worked. For example, there may be internal bulkheads or baffles dividing the ballast tanks. We might also find additional iron ballast weights placed within the tanks to help level the submarine.”

As there may be challenges excavating these compartments, since the ballast tanks will be difficult to access due to limited space, it is unknown how long this excavation will take.

The H. L. Hunley was located in 1995 by Clive Cussler’s National Underwater Agency (NUMA), a 501c3 non-profit organization. The hand-cranked submarine was raised in 2000 and delivered to the Warren Lasch Conservation Center, where an international team of scientists are at work excavating and conserving the historic vessel and its artifacts.
Hours of operation for public tours and the Hunley gift shop are from 10:00 a.m. to 5:00 p. m. on Saturdays and from noon to 5:00 p. m. on Sundays. All proceeds go to support the Hunley conservation and excavation project. To purchase tickets call toll free 1-877-4HUNLEY (1-877-448-6539) or log onto the Internet at www.etix.com.

(Charleston, SC) – Scientists trying to solve the mystery of the[...] 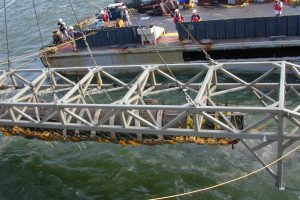