Scientists working to preserve the historic Hunley submarine may soon discover what the crew was doing during the final moments before they died in 1864. Were they frantically attempting to pump water out of a damaged vessel? Or were they trapped underwater, unable to breathe? We may soon know the answer.

Today, conservators will remove the aft (back) pump to prepare the submarine for its preservation treatment. Until now, surface concretion and the tight confines of the crew compartment prevented any detailed analysis of the pump.

Knowing whether the valves were open or closed could help answer key questions about the fate of the submarine and her crew. “Understanding what steps, if any, the crew was taking to save their lives is critical to our investigation into the Hunley’s disappearance,” said Hunley Archaeologist James Hunter with Clemson University Restoration Institute.

“Once we know the pumps setting, it will help us eliminate some of the existing possibilities,” said Senator Glenn McConnell, Chairman of the Hunley Commission.

There are dozens of theories surrounding this century old mystery. Perhaps the best-known theory is the Hunley suffered damage during her attack on the Housatonic and began rapidly to take on water, causing the vessel to sink.

Since the forward hatch was found ajar, some speculate Hunley Commander George Dixon may have opened it to gain his bearings or to replenish air in the crew compartment. While it was open, a wave may have swamped and sank the vessel.

However, both of these “drowning scenarios” will prove less likely if the crew was not trying to pump water out of the submarine. If the valves are found closed, it could support speculation the crew simply ran out of breathable air—while perhaps unaware their life was in immediate danger.

Another popular theory is the crew calmly waited for the tides to shift so they could ride with the current for the journey back to land. Instead, the oxygen slowly ran out, causing the crew to perish. This could remain a viable possibility if the valves are found closed.

Only more research will answer these questions. Scientists won’t be able to determine the valve settings until both pumps are removed from the submarine and can be studied in the lab.

Conservators have been at work for weeks to de-concrete the area and develop a plan to safely take out the aft pump. In the next few months, the forward pump will also be removed. When this work is completed, scientists will be a step closer to solving one of the most intriguing mysteries in maritime history. 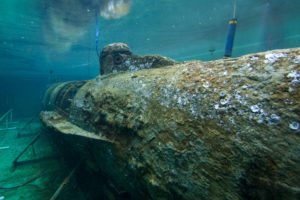 No one alive today has actually seen the original surface[...]